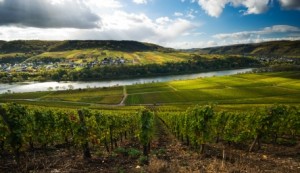 Â Those of us who live in the Finger Lakes region know that we have some pretty amazing wineries, and the beauty of the eleven-finger lakes surrounded by rolling hills rivals anything that can be seen in Europe or Napa Valley. Now the rest of the world is catching on.

The Atlantic recently published a pieceÂ on how the Finger Lakes is the next up-and-coming region, Â especially because of its Rieslings.

Caroline Helper, writing for the Atlantic, describes a wine region that’s been playing a game of catch-up with the well-established regions in California, Oregon and Washington. Helper credits the local food movement with people turning to their own communities for products and the region’s stellar Rieslings for the growing interest in Finger Lakes wineries.

The Riesling, first introduced to the region in 1962 by Ukrainian immigrant Dr. Konstantin Frank, is the most planted grape in the region, according to the Finger Lakes Wine Alliance. Finger Lakes Rieslings are noted for their dryness and pairing perfectly with meals.

The region also earned some buzz in 2011 when famous winemaker, Paul Hobbs, an Upstate New York native, announced that he’d like to make wines in the Finger Lakes.

So why has it taken so long for the Finger Lakes region to start earning national recognition? Helper writes that many of the local producers blame legislation for the Finger Lakes’ slow ascent into winemaking stardom. Prohibition, which was overturned in 1933, and the Farm Winery Act of 1976, which allowed numerous small and medium-size wineries to flourish, gave the region its slow start. Bob Madill of the Finger Lakes Wine Alliance told Helper:

“In general terms, prohibition slowed everything down and we’re still working our way out of it. For example, New York is one of the few large producing and consuming states that doesn’t allow the sale of wine in grocery stores and that is a historical vestige of the idea that sales of alcohol needs to be controlled.”

TheÂ Atlantic article also describes how Finger Lakes winemakers take a collaborative approach to producing wine. The region’s winemakers get together throughout the year and compare notes — they tell each other how they made their wines in the spirit of bettering the entire region. Many of the area’s winemakers are self-taught or trained in the local wineries. Many started out as growers. As Will Ouweleen of Eagle Crest Vineyards said:

Â “If you work in a vineyard you know that you can always do better. It builds character, integrity, and honesty and that expresses itself in the wine.”