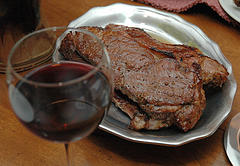 Photo by ricko
Researchers have discovered that drinking a nice Cabernet with your juicy steak at dinner protects your body from harmful toxins released during digestion. Red wine helps neutralize these toxins with antioxidants called polyphenols:

In a study on rats, scientists at Hebrew University in Jerusalem fed some of the animals ground meat, and fed others the same meat infused with red-wine extract. Subsequent tests revealed that the wine-dosed rats had lower levels of the fat-derived toxins.

â€œDiets high in fat and red meat are contributory risk factors,â€ the studyâ€™s authors write in the Journal of Agricultural and Food Chemistry. But if you do indulge in a grilled porterhouse now and then, you can reduce the risk with a glass of Cabernet Sauvignon.

The study helps to explain the so-called French paradoxâ€”the relatively low heart-disease rate among wine-drinking Frenchmen and -women, despite diets high in cheese, butter, meat, and other forms of fat.

Wine, the antidote to a grilled steak [The Week]